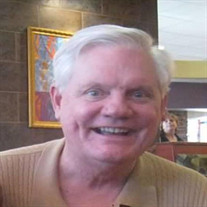 Terry Mitchell, 68, of Atlanta, GA passed away peacefully on July 4, 2020. He was born to Thelma Ann and Coy Vernon Mitchell on October 7, 1951 in El Paso, Texas and grew up in Salt Lake City, UT and Aurora, CO. He graduated from Hinkley High School, where he excelled at track and field and football, set records in short dashes, and worked at a dog kennel. He went to the University of Northern Colorado, where he earned a degree in Business Administration in 1974, while working as a concrete construction foreman. He rose through the ranks to become a successful executive vice-president in his company, relocating repeatedly across the country along the way. He is survived by his ex-wife, Kathy Mitchell; his children, Trevor Mitchell, Christina Greene, Kelly Mitchell, and Trent Mitchell; his brother Richard Mitchell; his sister Tina Brett; and his grandchildren, James, Alaina, William, and Sarah Greene; Avery, Connor, and Dashel Jeziorski, and Ella and Ava Mitchell. He was a charismatic, adventurous, strong man, whose charm captivated everyone he knew. Terry was a skilled raconteur, whose stories engaged and brought a smile to everyone in the room. He was very proud of his children and enjoyed regaling friends with stories of their accolades. He enjoyed hunting with his father and brother, playing tennis, golfing, and watching football. He was a great carpenter, a suave dancer, a generous tipper, a savvy businessman, and good at most everything he tried. His children’s treasured memories with him include breakfast picnics, Disney World, playing in fields of blue bonnets, beach vacations, camping, skiing, driving lessons, horseback riding, building the deck together, the exploding Thanksgiving whipped cream, family kickball games, and the renowned contest to see who could keep their feet in the Colorado river longest. Terry is loved and will be missed. We are grateful for the opportunities, lessons, and love he gave us. A part of him will always be with us.

Terry Mitchell, 68, of Atlanta, GA passed away peacefully on July 4, 2020. He was born to Thelma Ann and Coy Vernon Mitchell on October 7, 1951 in El Paso, Texas and grew up in Salt Lake City, UT and Aurora, CO. He graduated from Hinkley... View Obituary & Service Information

The family of Terry Lee Mitchell created this Life Tributes page to make it easy to share your memories.

Terry Mitchell, 68, of Atlanta, GA passed away peacefully on...

Send flowers to the Mitchell family.