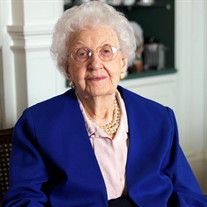 Martha Elizabeth McKenney Pittman died Sunday, June 7, 2020 at Presbyterian Village in Austell, Georgia, with her daughter Maurine Pittman by her side. Born December 14, 1916 to mail carrier, farmer and local business owner John Earle McKenney and Seventh District A&M teacher (later McEachern High School) Willie Lena Stewart McKenney, Martha attained the grand age of 103 and one half years. A lifetime resident of Cobb County, she was beloved by generations of Powder Springs and Austell citizens as a school teacher and active member of her church, Austell United Methodist. She was preceded in death by her spouse of 55 years, Austell and Powder Springs business owner Maurice Eugene “Big Jack” Pittman, Sr., and her brothers Carl and Earle McKenney. She is survived by her children, Maurine Pittman, Madge Hand (Bob), and Maurice Eugene “Jack” Pittman, Jr. (Vicki), and her grandchildren Leanne Hand Cook (Joe) and Paige Pittman (Mindy Evans) and her step great granddaughter, Ramsey Cook. She also leaves behind a number of beloved nieces, great nieces and nephews and many cousins. In her long life, Martha McKenney Pittman attained many goals, including graduating first from the Seventh District A&M School in Macland, Georgia, and then from the Georgia College for Women in Milledgeville, Georgia, in 1935 at the age of 18. After graduation she taught school in Cobb County and briefly served as principal of the elementary school in Powder Springs. She married Jack Pittman on December 19, 1937. Daughter Maurine was born in 1939, daughter Madge was born in 1942, and son Jack was born in 1946. While her husband was in the WWII Army Air Corps, Martha ran a government-sponsored Powder Springs nursery for children so that mothers could work to support their families while husbands were away at war. At the conclusion of WWII, Jack and Martha started a successful laundry and drycleaning chain in Austell and Mableton, Georgia. Martha McKenney Pittman loved a celebration and helped lead the civic life of her community for decades, organizing fall festivals, parades, and fun family events enjoyed throughout Western Cobb County. In lieu of flowers, the family requests that donations be made in Martha Pittman’s name to the church she was a member of for more than 70 years, Austell United Methodist Church at 5705 Mulberry Street, SW in Austell, Georgia. Funeral service will be at Austell UMC on Friday, June 12 at 1 pm and Martha will be buried at Macland Cemetery immediately thereafter. Visitation will be at noon at the church. In lieu of flowers, donations requested to Austell UMC, 770-948-1806.

The family of Martha Elizabeth McKenney Pittman created this Life Tributes page to make it easy to share your memories.

Send flowers to the Pittman family.