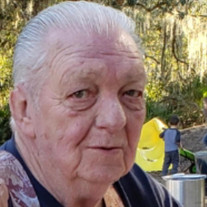 John “Jackie” Teal, 79, of Lithia Springs, passed on November 21, 2020 at WellStar Douglas Hospital, Douglasville, Georgia. Jackie was born on April 22, 1941 in Lithia Springs, to Lucius Howard and Bertha Louise (Hollis) Teal. Jackie married the love of his life, Phyllis Teal, on September 2, 1977, in Douglasville. Jackie and Phyllis lived in Lithia Springs, Georgia, all of their married life. Jackie is survived by his wife of 43 years, Phyllis; his daughter Jackie Duppenthaler (Don) of Groveland, Florida; sister Carol Brown of Lithia Springs; three grandchildren, Doug Duppenthaler (Stacey), Eric Duppenthaler (Danielle), and Leah Clough (Scott); and eleven great grandchildren, Cheyenne, Addisyn, Alyse, Kinsley, Ella, Kaiden, Kipton, Emme, Harvey, Kaysen and Clara; brothers-in-law, Bobby Jones of Talking Rock, Georgia and Bo Jones (Nancy) of Powder Springs, Georgia; sisters-in-law Joyce Russell of Villa Rica, Georgia and Debi Teal of Douglasville; and numerous nieces and nephews. Jackie was preceded in death by his parents and two brothers, Donald Teal and Richard Teal; and brothers-in-law Terry Brown and Rodney (Ron) Russell. Jackie was a devoted husband, father, grandfather and great grandfather; best known as “PaPa.” He was a machinist with Mead for 47 years and retired from the job in 2001. Jackie was a member of Victory Baptist Church in Douglasville. He loved the outdoors and went on several trips to spend time in the woods, just watching and listening to the sounds of nature. In his free time, Jackie loved to shoot his bow and was a member of Sweetwater Archery Club, where he held the office of treasurer and competed in tournaments for 3-D target shooting. He made lifelong friends while doing something he loved. He was also known to spend time on the greens of the golf course, in his boat fishing, or camping. Most of all, Jackie was family-oriented and loved spending time with his family and friends, sharing long life stories, lots of laughs and lots of conversation in person or on the phone. The funeral service will be held Wednesday, November 25, 2020, at 1:00 pm at Roy Davis Funeral Home in Austell. Visitation will be from 5 to 8 pm Tuesday, November 24, 2020, at the funeral home.

The family of John "Jackie" Teal created this Life Tributes page to make it easy to share your memories.

Send flowers to the Teal family.