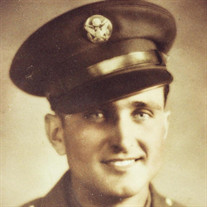 Howard Lawrence Watkins passed away on January 28, 2021 after celebrating his 100th birthday January 27, 2021 with a parade of family and friends led by the Douglas County Fire and Sheriff Departments passing by to honor him! Howard Lawrence Watkins was born January 27, 1921 to Jewell Belle Daniell and Howard Glenn Watkins where the Watkins family has lived in the Bill Arp Community of Douglas County for more than 125 years. He was brought up in a loving family with strong Christian values and in the Watkins tradition he never failed to have a smile and a hug to greet you! In 1939 he married Vassar Vining and raised two daughters Joyce and Jean. After attending Douglas High School, he started working for the Standard Oil Company in 1940 driving tractor trailer tank trucks. He joined the US Army in 1944 as a private and was assigned to drive trucks in Austria transporting communication equipment. His experience was beneficial driving over all types of roads, in mountains, under blackout restrictions and in convoy or single vehicle trips. He was a gun crewman for light artillery and wireman for telephone service between the front line and rear command. He received the WWII Victory Medal, European-African-Middle Eastern Service Medal, Rifle Marksman and Good Conduct Medal. Upon discharge in 1946, he served in the Active Reserve until 1955, attaining the rank of Master Sergeant. He is preceded in death by his wife Vassar Vining Watkins and his second wife Amoree Campbell Watkins, his parents, Jewell Belle Daniell and Howard Glenn Watkins and his siblings, Ila Brooks, Owen Watkins, Ann Henslee, Carlton Watkins and grandsons Larry Fox and Donald Fox. He is survived by his sister Glennie Tolbert, daughters Joyce (Bill) Chandler and Jean (Tom) Blair, grandchildren Keith Loop, Gable (Lawson) Clarke, Debby McKown, and Cathy Fox, and 9 great grandchildren and numerous nieces and nephews. The family is planning a memorial service at a later date.

Howard Lawrence Watkins passed away on January 28, 2021 after celebrating his 100th birthday January 27, 2021 with a parade of family and friends led by the Douglas County Fire and Sheriff Departments passing by to honor him! Howard... View Obituary & Service Information

The family of Howard Lawrence Watkins created this Life Tributes page to make it easy to share your memories.

Howard Lawrence Watkins passed away on January 28, 2021 after...

Send flowers to the Watkins family.