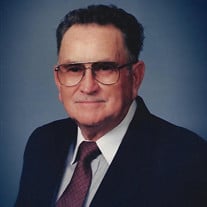 Mr. Floyd Thomas Kirby, 93, of Lithia Springs, GA, entered into eternal rest on 12/5/2021. Mr. Kirby was born on May 9, 1928, in Carroll County, GA to the late Mr. Floyd Tollison Kirby and Lena Elvira Daniel Kirby. He was a Baptist and Christian... View Obituary & Service Information

The family of Floyd Thomas Kirby created this Life Tributes page to make it easy to share your memories.

Send flowers to the Kirby family.