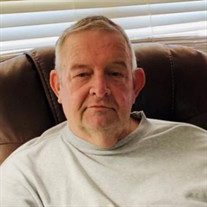 Danny Moore, 74 of Mableton, passed away on Tuesday, February 22, 2022. He is survived by his wife of 40 years, Judy Moore; children, Amy Sewell Pearson (Billy Pearson), of Carrollton, Carrie Sewell White (Kevin White) of Carrollton, Rachel (Chris) Gary of Tallapoosa and Mathew (Carrie) Moore of Mableton; grandchildren, Emily Johnson Bailey (Chris Bailey), JJ Johnson, Nick Pearson, Andy Pearson, Matthew Pearson, Nathan Pearson, Madison Gary, Riley Bell, Ethan Bell, Cameron White, Cassie Curtis, Charlee Curtis, Kodie White and Starlyn Moore; great grandchildren, Emersyn Bailey, Ava Johnson, Oaklyn Williams, Shylyn Johnson and Asher Bailey; brother, Kenny (Brenda) Moore of Austell, and nieces, Cheryl Moore, Debbie Gurley and Elizabeth Schreck. He was preceded in death by his parents, Leon and Clara Moore; brother Bobby Moore; sister Nancy Barfield and niece Pamela Kocsis. Mr. Moore loved the Lord and loved his church, Mt. Pisgah Baptist. He served as treasurer for over 30 years and was always willing to do whatever was necessary to take care of the church. He worked as an electrician until his retirement. He was a handyman who collected tools and could tinker with anything until he fixed it. He enjoyed cooking and sewing and watching the Georgia Bulldogs. He graduated from South Cobb High School in 1966. During his years there he was a well-known athlete in football, played baseball and basketball, ran track and competed in shotput and discus throw. After high school he proudly served in the US Navy. He loved to talk about his years in service and all the traveling as a sailor. A true fisherman that would fish anywhere, Danny’s favorite place was West Point. He loved to watch his daughters play softball and his grandsons play ball. He was a good listener, strong and tough, kind, caring and passionate. He was a good husband, father, grandfather and great grandfather. He always prayed over his family and taught the kids to pray early in life. He loved his family and will be greatly missed by all of them. The Moore family will receive friends from 5 to 8 pm Saturday, February 26, at Roy Davis Funeral Home. Funeral services will be 2:00 pm Sunday, February 27, at Mt. Pisgah Baptist Church, 851 South Gordon Road, Austell. Burial will be at Georgia National Cemetery in Canton at a later date.

The family of Danny Moore created this Life Tributes page to make it easy to share your memories.

Danny Moore, 74 of Mableton, passed away on Tuesday, February...

Send flowers to the Moore family.