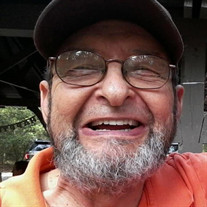 Harold Arnold Lee, 82 of East Point, passed away Friday, September 25, 2020. He was born in Douglasville on December 25, 1937, the son of Harold and Thelma Lee. He was a loving parent and Paw Paw that kids loved. He was dependable, always saying yes to anyone who called on him. He was an Army and Georgia National Guard Veteran; worked for Old Fashion Foods for more than 20 years; and recently was a paratransit bus driver for Cobb County Transit until Covid forced him to quit. For most of his career he was a JB Hunt truck driver and earned the Million Mile Safe Driver Award. Mr. Lee was a faithful servant of God. He sang in the choir, was a longtime member and deacon of Colonial Hills Baptist Church. He was a soul winner and enjoyed talking to people about Jesus and left Bible tracts everywhere. Mr. Lee is survived by his wife since January 5, 2020, Rita Lee of East Point; his daughter and son-in-law Anita & Wayne Holley of Douglasville; grandchildren Christy Lenardson of Missouri, Jason & Vikky Holley of Temple, Melissa Holley of Douglasville, Heather & Christopher Jordan of Douglasville, Stephanie LaVigne of Lithia Springs and Brandon LaVigne of Lithia Springs; great grandchildren, Jacob Lenardson, Chloe Lenardson, Kelsey Holley, Gabriella Holley, Robert Holley, Rosalee Holley, Haylee Jordan, Rayland Jordan and Sadie Jordan; sister Linda Martin of Villa Rica and brother Douglas Lee of Douglasville. He was preceded in death by his parents; wives, Louise Lee and Nell Lee, and daughter Lisa LaVigne. Funeral services for Harold Arnold Lee will be held at Colonial Hills Baptist Church in Lithia Springs on Tuesday, September 29, 2020, with Pastor Mark Ernst officiating. The family will receive friends from 11:00 am until service time at 1:00 pm. Deacons will serve as honorary pallbearers. Burial will follow at Mozley Memorial Gardens in Lithia Springs. Services provided by Roy Davis Funeral Home, Austell.

Harold Arnold Lee, 82 of East Point, passed away Friday, September 25, 2020. He was born in Douglasville on December 25, 1937, the son of Harold and Thelma Lee. He was a loving parent and Paw Paw that kids loved. He was dependable, always saying... View Obituary & Service Information

The family of Harold Arnold Lee created this Life Tributes page to make it easy to share your memories.

Send flowers to the Lee family.