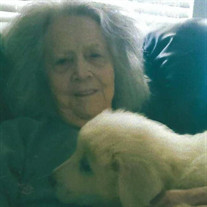 Barbara Gray New of Heflin, AL, passed away peacefully at her home on December 4, 2021, one week before her 84th birthday. She was born in Atlanta on December 11, 1937, the daughter of JD and Frances Gray. She is survived by her daughter, Robin (Bubba) Boyd; grandchildren, Nicholas A. Boyd, Nathaniel J. (Darlene) Boyd, Crystal J. (Solomon) Green and Cassie L. (Aaron) Silva, and great-grandchildren, Ethan Mellow, Nathan Boyd, Rylan Boyd, Destiny Green, Faith Green, Hope Green, Trinity Green, Jaiden Boyd, Kaelyn Denson, Ashlynn Denson, Lilian Silva, Josh Silva, Brianna, Ashlyn and Madison. She was preceded in death by her parents; husband, James Everett New; son, John Everett New, and sisters, Ruth Wood and Ginger Reagan. Known as Momma and Granny, Mrs. New loved her family dearly and there was nothing she wouldn’t do for them. Knowing they would miss her, she comforted them, letting them know she was ready to go home. She loved God and was ready to be with Him and her family members that had gone before her. Mrs. New married young and was widowed at 18, leaving her with two children under the age of two. She worked about 25 years with the Georgia Department of Revenue as a Tax Investigator; worked nights for a while at Cobb General Hospital and earned her associate degree while raising her children on her own. She was an independent, strong-willed woman. Mrs. New lived in Mableton for 46 years before moving to Heflin in 2007. Her farm was off the beaten path but she was quick to say she found it because “God sent me there.” While living in Mableton she was a member of Orange Hill Baptist Church and volunteered at the Mable House. In Alabama she served her community as a local member of Pilot Club International. Her hobby was buying and saving mint coins. According to her wishes, Mrs. New will be cremated. Her ashes will be buried by her husband and son in Barber Cemetery in Mableton. The graveside service will be held at 1:30 pm on Monday, December 13, 2021.

Barbara Gray New of Heflin, AL, passed away peacefully at her home on December 4, 2021, one week before her 84th birthday. She was born in Atlanta on December 11, 1937, the daughter of JD and Frances Gray. She is survived by her daughter, Robin... View Obituary & Service Information

The family of Barbara Gray New created this Life Tributes page to make it easy to share your memories.

Barbara Gray New of Heflin, AL, passed away peacefully at her...

Send flowers to the New family.