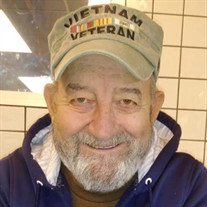 Thomas Byron Crenshaw 71 of Hiram, Ga was welcomed home on August 17, 2021, after complications from cancer. He was born in Northern Georgia to George & Inez Crenshaw June 08, 1950. He spent most of his life in Smyrna until moving to Hiram in his later years. As a young boy he was a Boy Scout that adored animals and a good night out at the skating rink. As a teenager his infatuation with vehicles began, he enjoyed working on them with his Uncle Johnny and friends. He attended Campbell High School and worked for Campbell’s restaurant and JD Daniels at Jonquil Plaza until he joined the Marines in 1968. He served 2 tours in Vietnam where he drove an Amtrack with 1st Marine division 3rd Amtrack battalion, Bravo Company, 3rd Platoon and was a Purple Heart recipient. He came home in October of 1970 and married the love of his life, Margaret Southern. Soon after they were off to Camp Lejeune until 1971. When he came back to his hometown of Smyrna, he served as a police officer for a short time in Atlanta. He even worked as a body man for a few years. Later he and his lifelong friend Mickey Smallwood started driving 18 wheelers during the week and drag racing on the weekends with their wives. He joined the Smyrna Oakdale Moose Lodge in 1977. He did a lot of community work- raising money for Moose Heart and Moose Haven by entertaining many people throughout the state, benefit rides on his motorcycles, fish fries and even steak nights! For his hard work and dedication, he was awarded the highest honor, the Pilgrim Degree. He took a job with MARTA in the 1980’s and every opportunity MARTA offered him he took it, moving up ranks every chance he got. After 30 years, he retired and stayed home to hang out with his grandbabies eating popsicles and watching Sponge Bob. He soon turned back to the 18 wheelers and traveled all over the United States with his brother, Luther “Skip” Crenshaw, while collecting snow globes for his granddaughters. After a few years, he decided the road was taking too much time away from family and his favorite dog Buddy, so he gathered up their snow globes and made his way back home. Soon after, he began operating a bus for the Cobb County Transit, where he cherished his colleagues and passengers. He stayed there up until his diagnosis. He adored his family and friends. In the 90’s he enjoyed watching his son, Johnny race his pony stock car. He would always be there cheering him on and loaning him parts off his wife’s pinto in the parking lot. For years he helped take care of his favorite mother-in-law. Always leaving the door open for anyone in need. He has walked nieces down the aisle, help name another, worked on his grandson’s vehicles, came off the road to take one of his granddaughters to a dance. School lunches, concerts, awards you could bet he would be there! He love spending time at the lake with his wife. He was always up for good book, some woodwork, a game of chest or a good cartoon marathon. He had friends everywhere he went, he never meet a stranger. He will be missed very much and by a lot of people. He was preceded in death by his parents, George & Inez Crenshaw, and sister Brenda Hill. He is survived by his wife of 51 years Margaret Crenshaw, his 2 children Johnny (Missy) Crenshaw, Julie (Shane) Maxwell, his 4 grandchildren Tim (Cortney) Crenshaw, Gage Maxwell, Lailee Maxwell and Izzy Crenshaw and one Great grandchild Eason Crenshaw. His Sisters Teresa (Ben) Chapman, Rosemary Crenshaw, His brother Skip (Patty) Crenshaw 8 nieces, 3 nephews and many other family and friends. A memorial service will be held on Saturday August 28, 2021, at 2 p.m. from the Roy Davis Funeral Home Chapel. Family will receive friends from 12-2 at the funeral home.

Thomas Byron Crenshaw 71 of Hiram, Ga was welcomed home on August 17, 2021, after complications from cancer. He was born in Northern Georgia to George & Inez Crenshaw June 08, 1950. He spent most of his life in Smyrna until moving to Hiram in... View Obituary & Service Information

The family of Mr Thomas Crenshaw created this Life Tributes page to make it easy to share your memories.

Send flowers to the Crenshaw family.