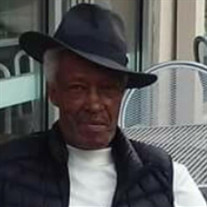 Sherdell Taylor transitioned peacefully at home in Marietta, Georgia on October 4, 2017. Mr. Taylor was born on September 21, 1941 in Mounds, Illinois to Ella Mae King and Doil Taylor. As a youth, Mr. Taylor sang in the youth choir at the Seventh Day Adventist Church. He accepted Christ and was baptized in 2001. He moved to Battle Creek, Michigan when he was a youth. He attended Battle Creek Central High School and graduated in 1960. Mr. Taylor enjoyed reading, horseback riding and fishing during his free time. Mr. Taylor moved to Marietta, Georgia in 2015, and became actively involved at the C. Freeman Poole Senior Center, where he enjoyed playing pool. Although Mr. Taylor had many side jobs, as a hardworking man, for nearly four decades, Mr. Taylor was a truck driver. Having moved to Detroit, Michigan as a young man, he helped with construction of the Renaissance Center in Detroit, among many construction projects in the Detroit Metro area. For many years, Mr. Taylor drove for the family trucking company, DT Trucking. Mr. Taylor married Beverly Henry. She survives him and to that union, Mr. Taylor is survived by children, Trent (Wendy), Ingrid (Anthony), Kam, Lance, and a special daughter, Tiscur. Mr. Taylor is also survived by his sisters, Rae (Luther), Judy, Cheryl, Gloria, and Celita; brothers, Ernest (Wadline), Kennieth and Shannovia. Mr. Taylor is survived by his Aunt Barbara, and a host of nieces, nephews and other loved ones. Mr. Taylor was preceded in death by his parents; sisters, Elizabeth, Debra, and Barbara; brothers, Benard, Lawrence, Lamont and Doil, Jr. Mr. Taylor enjoyed life up until his last breath. His favorite past time was spending time with his children, his 10 grandchildren, and 11 great grandchildren. A celebration of life service was held on October 14, in Marietta, Georgia

Sherdell Taylor transitioned peacefully at home in Marietta, Georgia on October 4, 2017. Mr. Taylor was born on September 21, 1941 in Mounds, Illinois to Ella Mae King and Doil Taylor. As a youth, Mr. Taylor sang in the youth choir at the... View Obituary & Service Information

The family of Sherdell Taylor created this Life Tributes page to make it easy to share your memories.

Send flowers to the Taylor family.