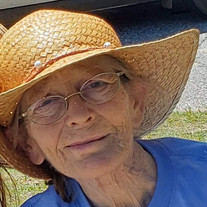 Sandra Gayl Engler, 68 of GA, passed away Saturday, August 10, 2019 at WellStar West Georgia Medical Center in LaGrange, GA. “Gayl” as she was known best by her family and friends, was born in Marietta, GA on September 13, 1950, the daughter of the late Albert Allen Engler and Ora Bell Hanson. She worked at National Envelope in Inventory Control until her retirement as a manager. Gayl was a fighter. She was an independent and strong mother who raised three girls on her own. She loved with all of her heart. Gayl was known as a “stick with you ‘til the end” kind of person. She had no problem telling you if you were wrong, but she would never leave your side. She will be loved and remembered by her daughters Erica and Karen who will pass on loving stories of their mom to their kids, Emily, Bekah, Bailey, Corbin and Gabriel. She will be remembered as a strong and devoted big sis by her younger brothers Billy and David. She was fond of quilting and gardening, but her favorite hobby was spending time with her family. She was a Baptist by faith. Gayl was preceded in death by parents, daughter Rebekah Kirkpatrick, sister Rebekah Shuler, brothers Bobby and Tommy Engler, and granddaughter Hailey Bryant. Survivors include her children, Karen Bryant, and her husband Mike, of Douglasville, and Erica Owen-Herpst, and her husband Jon Herpst, of Manchester; grandchildren, Emily, Bekah, Bailey, Corbin, and Gabriel; as well as two brothers, Billy Engler of Yorkville, and David Engler. The family will have a Memorial Service for Gayl, Saturday, August 24, 2019 at 1:00 PM at Roy Davis Funeral Home, 5935 Mulberry Street, Austell, Ga. 30168; www.roydavisfuneralhome.com. Cox Funeral Home, 706.846.3110 is assisting the family with arrangements. All are invited to sign the online guestbook for Gayl at www.coxfh.com.

The family of Sandra Gayl Engler created this Life Tributes page to make it easy to share your memories.

Send flowers to the Engler family.