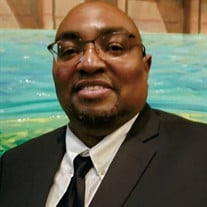 Lived, Laughed, & Loved Rodney Dashone Simpson, the third son born to Mr. Robert & Mary Simpson, was born February 21, 1969 at Grady Memorial Hospital. He was born and raised in Atlanta, GA. Rodney enlisted in the U.S. Navy via the Delayed Entry Program while he was a Junior at Charles Harper H.S. Following graduation, he immediately left to serve his country by doing four years active duty and four years in the Reserves. He was employed with the Kenan Advantage Group for over 25 years as a Driver Trainer until his promotion to Regional Safety Manager. Rodney was proceded in death by his parents and a brother, Kim Simpson. To cherish his memories are his brother, Patrick Simpson; through his marriage to Telicia Simpson, a mother-in-law, Rosa Tucker; a daughter, Tamarrilise (Tami) Craft; a son, Jarrius Jackson; nine grandchildren, two he helped raise (Jessiny & Germanie but he loved them all equally); and one great-grandson; eight aunts, one was a second mother to him, Vallie (Kevin) Dorsey; one uncle; two-brother-in-laws; five nieces; two nephews; and a host of cousins, other family, and friends, to include Patrick’s fiance Latera Evans. Although he loved each and everyone of his family members, some cousins had a undeniable place in his heart. Chris was a bonus brother to him. Mildred and Trisha were the sisters he never had. Then there is the Breakfast Club or the Crosby Drive Boys which are a group of friends that grew up together, became and will always be family. They are: Tood Miles, Willie (Hula) Henderson, Quinton (Pokey) Henderson, Mike Holt, Marlon Whitner, and Patrick Simpson. May they keep the bond and continue the legacy in his honor. Rodney was always smiling with that big, beautiful smile that just warmed your heart. He lived well, laughed often, was very much loved and loved much in return and that is how he will always be remembered.

The family of Rodney Dashone Simpson created this Life Tributes page to make it easy to share your memories.

Send flowers to the Simpson family.