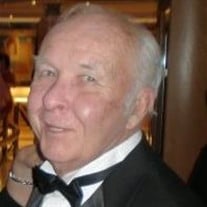 Robert Lamar Whatley went home to be with his Lord and Savior, Jesus, on September 3, 2019 at the age of 77. He died near his home in Lithia Springs, GA. Robert was born on November 20, 1941 in Atlanta, Georgia. He was preceded in death by his parents, Walter and Avis Tatum Whatley, and his younger sister, Carolyn Standridge. Robert grew up in the Morningside area of Atlanta where he graduated from Grady High School in 1959. He later graduated from Georgia State University and then John Marshall Law School. Robert loved to teach. Right out of college, he found himself teaching elementary school. This is where he met and fell in love with one of the teachers there, Sally Elizabeth Adams. They soon married and moved to Lithia Springs, where I-20 ended at the time. While Sally continued to teach, Robert followed his interest in real estate and got a job with the City of Atlanta as an appraiser. His Atlanta street map books and really long measuring tape are hard to forget. He later combined these interests by teaching the occasional real estate class at both community and university-level schools. As if real estate and teaching were not enough, he also had a love for the law. Robert was a criminal defense attorney which was always taking him, as Sally would say, to visit “the shut-ins”. After many years of this, he eventually earned the title of Judge. In his mind, this was his crowning achievement and a title that he bore proudly. To others, however, his bigger achievement was his constant aid to the underdog. As a devoted husband and father, he not only taught his children to love God and to love others, but modeled it on a daily basis. Whether it was a defendant, a student, a youth going on a mission trip, a waitress with legal trouble, or the boys’ mission group at church - his goal was always the same - to help others. He gave generously of his time, talents, and money. Giving the children’s sermon at church also brought him great joy. Although some knew him as teacher, counselor, judge, or benefactor - many knew Robert as author. He wrote editorial columns for the Douglas County Sentinel for over 20 years. Three volumes of his columns may be found at the local library. His favorite ones were compiled into a book entitled “Honestly, I Love You Douglas County”. While Sally loved to travel abroad, Robert enjoyed exploring the North Georgia mountains. His other interests in animals and trains would more than exhaust the space provided here. Robert and Sally were married for 39 years when she passed in 2008. Within about 7 years, living alone proved to be difficult as his health slowly declined. Due to several health issues, he was no longer the once vibrant and active man that his family had known him as. To say he is in a better place is as true as it is cliché. He loved God and is now before his throne... and what can be better than that? Robert is survived by his brother, Everett Whatley; sister, Annette Emory; son, Andrew Whatley, daughter-in-law, Kathleen Whatley; daughter, Jennifer Govea, son-in-law, Enrique Govea; and three grandsons, William Whatley, Nathan Whatley, and David Govea. Please join us to celebrate his life on Saturday, September 7th at Lithia Springs First United Methodist Church at 3711 Temple St, Lithia Springs, GA 30122. Visitation will be from 2:00 pm – 3:00 pm in the sanctuary with the service starting at 3:00 pm. In lieu of flowers, donations may be made in his name to: Lithia Springs First United Methodist Church, Youth Department or any humane/animal shelter.

Robert Lamar Whatley went home to be with his Lord and Savior, Jesus, on September 3, 2019 at the age of 77. He died near his home in Lithia Springs, GA. Robert was born on November 20, 1941 in Atlanta, Georgia. He was preceded in death... View Obituary & Service Information

The family of Robert Lamar Whatley created this Life Tributes page to make it easy to share your memories.

Robert Lamar Whatley went home to be with his Lord and Savior,...

Send flowers to the Whatley family.