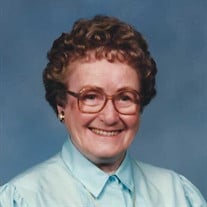 On Thursday, March 25, 2021 Myrtle Estell Elsner went home to be with her Lord and Savior, at the age of 99. Myrtle was born on November 30, 1921 in Carroll County Georgia to James William Byram and Annie Clyde Vines. She was a devoted daughter,... View Obituary & Service Information

The family of Myrtle Estelle Elsner created this Life Tributes page to make it easy to share your memories.

Send flowers to the Elsner family.