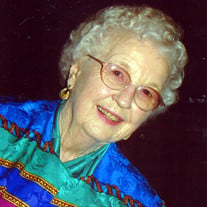 Myrtis Brooks Styles, 98, of Smyrna, passed away Friday, November 10, 2017. Mrs. Styles was born September 24, 1919 in Forsyth County, GA to Claud and Ethel Brooks. As a Presbyterian minister’s wife for over 71 years, she stood beside her husband, Walter, as he pastored churches in North Carolina, Florida, and Georgia until his retirement in 1981 at which time they retired to their beloved mountains of Western North Carolina. An avid seamstress, her beautiful handiwork of smocking has been worn proudly by generations. She is preceded in death by her parents, her husband, Walter Styles, 2 brothers, Joe and Billy Brooks and 1 sister, Nell Bramblett. She is survived by a daughter, Kemie Brown-Vansant (Nick), of Dallas, GA ; a son, Brooks Styles (Ellen) of Summerville, SC; grandchildren, Lindsey, Ginny, Colin and Julie; great grandchildren, Jude, Stella, McCulloch, Walter, Mayes, Mary Grace, Frances, Anna Kate, and Ty; and numerous nieces and nephews. A memorial service will be held November 19, 2017 at 2:00 p.m. at Austell Presbyterian Church, Austell, GA. In lieu of flowers, donations may be made to Alzheimer’s Disease research. (brightfocus.org) or to the Black Mountain Presbyterian Church. The family wishes to express sincere thanks to the staff at Senior Lifestyles at Peachtree Creek and the staff of Regency Hospice for their loving care.

Myrtis Brooks Styles, 98, of Smyrna, passed away Friday, November 10, 2017. Mrs. Styles was born September 24, 1919 in Forsyth County, GA to Claud and Ethel Brooks. As a Presbyterian minister&#8217;s wife for over 71 years, she stood beside... View Obituary & Service Information

The family of Myrtis Brooks Styles created this Life Tributes page to make it easy to share your memories.

Send flowers to the Styles family.