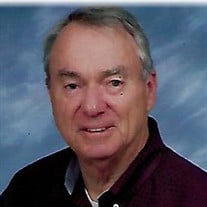 John Lind Collar passed away on December 27, 2018 due to ongoing complications associated with his heart, at the age of 87. John lived the majority of his life in Austell and Douglasville, Georgia, and was a devoted son, brother, husband, father, and grandfather. He was a dedicated leader in his community. He was the President of Austell Cabinet Company, a family owned furniture manufacturing business founded by his father in 1905. John was devoted to his family and friends, and loved them deeply. John was preceded in death by his parents, William F. Collar, Sr. and Virginia Fraser Collar, and his siblings, William F. Collar, Jr., Carleton Collar, Henry Collar, Virginia Clark, and Grace Clark, his daughter-in-law, Maureen Collar, and his grand-daughter, Christine Angela Collar. He was married to Mary Caroline Paul Collar for thirty-four years, who passed away in 1991. With Caroline, they had four children, William (Bill) F. Collar, II, Nancy Caroline (Collar) Connell, John Lind Collar, Jr., and Paul Winn Collar. In 1997, John married Betty Whisenant, and resided together in Douglasville, Georgia until his death. John is survived in life by his loving wife, Betty Whisenant of Douglasville, and his four children, Bill Collar (Sharri) of Acworth, Nancy Caroline of Maryville, Tennessee, John Collar, Jr. (Kathy) of Marietta, Georgia, Paul Collar (Natalie) of Athens, Georgia, his stepson, Mark Whisenant (Nora) of Marietta, and his grandchildren, William (Alliey), Philip, Claire, Zachary, Andrew, Michael, John, III, Caroline, Patrick, Katie, Hayes, Anna Porter, Winn, Aaron, Joe, Michael, Colin, Jennifer and his great-granddaughter, Ava. He graduated from Austell High School in 1948. John then matriculated to Emory at Oxford College where he received his degree in 1950. He then attended North Carolina State University where he graduated in 1953 with a Bachelor of Science degree in Engineering in Furniture Manufacturing & Management. He played varsity tennis at Emory at Oxford and North Carolina State. He graduated from the U.S. Naval Officer Candidate School in November 1953 and proudly served as the Communications and Operations Officer aboard the USS Douglas H. Fox for several years. John believed in giving to the community where he lived and was a dedicated community servant. He served on the Cobb-Marietta Library Board and was Chair of Sweetwater Library Board in Austell. In 1998, John was named the South Cobb Citizen of the Year. He was elected and served on the Austell City Council beginning in 1962, serving as the Mayor of Austell for eight years, from 1982 through 1989, and was awarded the M. L. Lamar Lifetime Achievement Award for Public Service by the Austell Business Association. John became a dedicated member of the Austell Rotary Club in 1957, serving in a variety of capacities, including as its President. He is a Rotary Paul Harris Fellow and Will Watt Fellow. He also served as a Member and Chairman of Cobb WellStar Hospice after the passing of his first wife, Caroline. A life-long member of Austell United Methodist Church, John served on the Administrative Council and taught Sunday School for 40+ years. The purpose of life is not to just be happy. It is to be useful, to be honorable, to be compassionate, to have it make some difference. The life of John Collar was well-lived. It was filled with his precious family and dear friends. John was a truly blessed man on both fronts. He was always proud of his family, and they were proud of him. His life was enriched by his many friends and it is clear how meaningful they were to him. The Collar family will host a visitation at Roy Davis Funeral Home on Sunday, December 30, 2018 from 4:00 p.m. until 6:00 p.m. A memorial service will be held at Austell United Methodist Church at 11:00 a.m. on Monday, December 31, 2018. In lieu of flowers, donations honoring John’s life may be made to the WellStar Hospice Angel Fund, Austell First United Methodist Church, or Sweetwater Valley C.A.M.P.

John Lind Collar passed away on December 27, 2018 due to ongoing complications associated with his heart, at the age of 87. John lived the majority of his life in Austell and Douglasville, Georgia, and was a devoted son, brother, husband, father,... View Obituary & Service Information

The family of John Lind Collar created this Life Tributes page to make it easy to share your memories.

Send flowers to the Collar family.