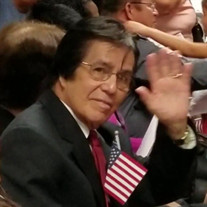 Hector Orozco Esquivel of Douglasville, Georgia passed away Tuesday, February 8, 2022, just one month shy of his 83rd birthday. He had been a successful and active kidney dialysis patient for the past 7 years but had been unwell these last 2 months. He was born in Monterrey, Mexico on March 14th, 1939, to his parents, the late Antonio and Ernestina Orozco Esquivel. He came to the United States at a very young age defying all odds to provide an opportunity to his beautiful wife Nora Elia Orozco and their five children. He spent his entire career in the hospitality and restaurant business and was a Maitre’d at many 5-star restaurants in Houston, TX, New Orleans, LA, and Atlanta, GA. In the early 1970’s Hector would go on to achieve the remarkable success of establishing and owning his own Mexican restaurant called La Huasteca Mexican restaurant where his wife and children helped run the restaurant. Additionally, in the early 1980’s he would go on to open his second restaurant & grille in Harvey, Louisiana known as the Town Grille. He was also an accomplished Artist and Chef in his own right. His emboldened and relentless pursuit of success to set an example for his family positioned him to become an American Citizen in 2016 which served to be a proud and momentous occasion as well as a promise kept with his late and beloved wife of 52 years Nora Elia Sauceda-Orozco who passed away in November of 2013. More than life itself, Hector adored the meaning of Family and Freedom and preserving the Orozco Legacy. He loved taking vacations with his wife and children to Monterrey, Mexico, Destin, FL and Gatlinburg, TN. He is survived by his five children and four grandchildren: Hector S Orozco Jr his wife Kelly L. (Ledet) Orozco, Cielo Nury & her husband Jonathan Topper (Grandchildren: Marie-Claire & David-Joseph Topper), Nora Lydia & her husband Francisco Javier Reyes (Step Grandchildren: Daniel & David Reyes), Alejandra Mayela Orozco, and Francisco & his wife Nicole (Parsons) Orozco (Grandchildren: Francisco Jr and Corbin Grayson Orozco & Step Granddaughter: Taylor Leigh Leblanc) along with his siblings Rodolfo Orozco, Dianna Orozco, and Maria Elena Orozco. Hector is preceded in death by his wife of 52 years Nora Elia Sauceda-Orozco, his parents Antonio & Ernestina Orozco, his 4 siblings Valdemar Orozco, Antonio Orozco Jr., Alfonso Orozco, and Ernestina Orozco, and his Step Granddaughter Mavy Reyes. Hector’s love for serving others was both infectious and felt by so many that met him. He was deeply loved by so many and will be missed beyond measure.

Hector Orozco Esquivel of Douglasville, Georgia passed away Tuesday, February 8, 2022, just one month shy of his 83rd birthday. He had been a successful and active kidney dialysis patient for the past 7 years but had been unwell these last... View Obituary & Service Information

The family of Hector Orozco Esquivel created this Life Tributes page to make it easy to share your memories.

Send flowers to the Esquivel family.