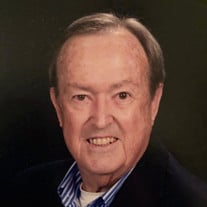 Fred W. Ray of Austell, GA passed away Wednesday, January 15, 2020. He was born in Husum, Germany on January 25, 1950 to Harold and Isle (Harms) Ray. He is survived by his loving wife of 44 years, Jerri Ray and his children: Winston and his wife Ashley Ray of Marietta, GA, and Tiffany and Christopher Reed of Basking Ridge, NJ. He has a granddaughter, Harper Reed. He is preceded in death by his parents, and a brother, Edwin Ray. Fred was the son of an Air Force Military Policeman and lived in many places including Germany, England, Washington State, Colorado Springs, and Atlanta. This ignited his passion for travel, language and world history – he was fluent in German and knew how to say hello in many languages so he could greet anyone he encountered with a friendly hello in their native tongue. In his early years, he enjoyed soccer, basketball, racquetball, tennis, skiing and photography. He met his wife in Colorado Springs through their connection with the Navigators Christian Organization. Fred was a loving and devoted husband, father, and grandfather. He enjoyed spending time with his family as much as possible and frequently traveled all over to see them. His smile and laughter were infectious and he took the time to talk and listen to everyone he came in contact with – abiding in the Golden Rule to “Do unto others as you would have them do unto you.” He was a prayer warrior and spent many hours each day talking to his Heavenly Father praying for his family and loved ones. Fred and Jerri are long standing members at Westside Baptist Church where he also served as a Deacon. Fred was a licensed nurse and retired in 2011 from Wellstar Cobb Hospital. A Memorial service will be held at Westside Baptist Church 225 Fontaine Rd SW Mableton, GA 30126, on Saturday, January 25, 2020 receiving guests from 2:00 pm – 3:00 pm, service beginning at 3:00 pm. He was laid to rest at Mt. Harmony Memorial Gardens in Mableton, GA. In Lieu of flowers please make a donation to Westside Baptist Church; https://wbcfamily.org/

Fred W. Ray of Austell, GA passed away Wednesday, January 15, 2020. He was born in Husum, Germany on January 25, 1950 to Harold and Isle (Harms) Ray. He is survived by his loving wife of 44 years, Jerri Ray and his children: Winston and his... View Obituary & Service Information

The family of Fred W Ray created this Life Tributes page to make it easy to share your memories.

Send flowers to the Ray family.