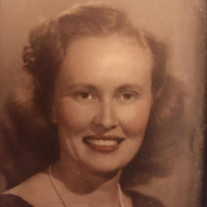 Erma Jo Conner Allgood went to be with The Lord on December 17, 2021 - embraced in love that day by her husband, Harry; sons David and Eddy; and daughter-in-law Gina. Jo was born in Villa Rica, Georgia, on January 6, 1927, to Aubrey and Winnie Kate Pope Conner. Winnie Kate died on Jo's ninth birthday in 1936 - leaving her to be raised by her father and a succession of unacceptable stepmothers; her older brothers - JW and Casper - chose to live with their paternal grandparents. Jo graduated from Villa Rica High School in 1943 as the Salutatorian of her class - her GPA being .01% below the boy awarded Valedictorian (or so reported by the Principal). After high school, Jo joined the work force as a clerical employee - employed first by Southern Railroad and then moving on to The Georgia Power company. On June 11, 1949, Jo met the love of her life - Harry Allgood - on a blind date. They were married one year later on June 11, 1950, and in 2021 celebrated their 71st wedding anniversary with a family trip to Pigeon Forge, Tennessee - surrounded by children, grandchildren, and great-grandchildren. Jo was a devout Christian and lifetime member of the Southern Baptist Church. Her happiest times in the church were during her membership at Glenwood Hills Baptist Church in Decatur, Georgia. At Glenwood Hills, Jo was active in the Womens' Missionary Union, Girls' Auxillary, and taught Sunday School in the High School Girls department. Jo was a Den Mother in David's Cub Scout pack and was active in the PTA during David and Eddy's elementary and high school years. Long before each son started first grade, Jo took David and Eddy to the downtown library in Decatur on most Saturdays, where they would select the maximum number of books to be checked out (12) and take them home for the week's reading. This instilled in both sons a lifetime love of art and literature; Jo also taught both of them to read before entering elementary school. In the late 1960's, Jo began working as a seasonal employee at the IRS, where she remained until the early 1980's. At that point, she began a career in the accounting department for the U.S. Army at Fort McPherson in Atlanta, Georgia, where she remained until her retirement in 1989. Jo had a love for travel that she enjoyed her whole lifetime. When the boys were young, the family travelled in their pop-up Kozy Kamper to many far-flung destinations in the United States and Canada - including Key West, Anaheim (Disneyland!), Colorado's Rocky Mountains, Niagara Falls (Canadian side)...and many more. She and Harry visited every state in the United States - including Alaska and Hawaii. Jo realized a lifetime ambition - twice - when she and Harry travelled through Europe after retirement - visiting England, France, Germany, Italy, Switzerland, and other western European countries - places she had read and dreamed about as a little girl. Jo had a lifetime passion - and a green-thumb talent - for gardening. Her front yard was always in bloom with the flowers of the season - with her azaleas being particularly spectacular every spring. Eddy and Gina have taken cuttings and seedlings and repotted and/or replanted in their respective homes and yards as a living reminder of Jo's talent and love for gardening. Jo was known for her generous heart and cheerful giving. She had a knack for always selecting just the right gift for a birthday or Christmas. She never, ever forgot a birthday of a friend or loved one in the family - and knew the birth dates by heart of all family members - even at nearly 95 years of age. Her love and generosity extended beyond family and friends to those around the world who needed help. In light of that, please consider as an option to flowers making a donation to one of the many charities Jo supported throughout the year: Habitat for Humanity St. Jude Hospital Shriners' Hospitals World Villages Doctors Without Borders Smile Train Life Outreach Mercy Corps Navigators Americans Helping Americans Jo is survived by her husband, Harry; sons David (Gina) and Eddy; grandchildren Severin (Alicja) and Caitlin (Davis); great-grandchildren Valentine, Violet, Kellen, Conner, and Jay - plus countless friends and extended family members. She loved many and was loved by many more. A memorial service and celebration of the life of Erma Jo Conner Allgood will be held at 11:00 AM (EST) on January 6, 2022 (her 95th birthday), at The First Baptist Church of Lithia Springs, Georgia. Out of respect and honor for Jo's belief in science and medicine (she was fully vaccinated against the coronavirus), we ask that all attendees wear a mask for Covid-19 precaution/prevention. "Thou shalt love the Lord thy God with all thy soul, and with all thy mind...the second is like unto it. Thou shalt love thy neighbor as thyself." Matthew 22:37.

Erma Jo Conner Allgood went to be with The Lord on December 17, 2021 - embraced in love that day by her husband, Harry; sons David and Eddy; and daughter-in-law Gina. Jo was born in Villa Rica, Georgia, on January 6, 1927, to Aubrey and Winnie... View Obituary & Service Information

The family of Erma Jo Conner Allgood created this Life Tributes page to make it easy to share your memories.

Erma Jo Conner Allgood went to be with The Lord on December 17,...

Send flowers to the Allgood family.