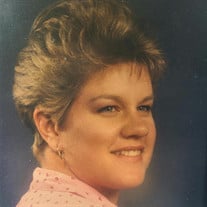 Cathy Bond Sanders was born at Crawford W. Long Memorial Hospital in Atlanta, Georgia. Raised in Austell, Georgia, Cathy was the only child of James C. Bond and Carolyn F. Bond. Growing up, Cathy always had a sense of adventure and a love for life. During school, Cathy was part of girl scouts and was also a cheerleader. She enjoyed being outdoors, hiking and camping. In 1982, Cathy met the love of her life, Victor Sanders, at a local arcade. In a love story that would last for 38 years, Victor spent six months courting Cathy. Cathy would give him a run for his money declining his proposal a total of three times before she said yes! Victor and Cathy married September 24, 1982 in Mableton, Georgia at Mt. Pisgah Baptist Church. In that 38 years they would have two kids, Christopher Alan Sanders (b.11/25/1985) and Kyle Sanders (b.08/15/1988). The only thing Cathy enjoyed more than being a wife and homemaker was being a Mom. Cathy’s pride and joy were her children. Her boys remember her as being full of happiness and always there if they needed anything. Cathy was the epitome of selflessness. She took pride in her home, always running a tight ship with her family, and taking care of everyone before herself. Her door was always open to the neighborhood children and anyone who needed anything. Cathy was always there to put a smile on everyone’s face she ever encountered. She spent her life dedicated to focusing on the good in people and the bright side of life. Her joy was as infectious as her smile. Her hugs could warm up an entire soul. Cathy’s love spread to humans and animals alike. She loved playing with her dogs and cats and was an advocate for treating animals with love and care. If Victor would let her, she would adopt every abandoned animal within her grasp. Her love was humbling. It was hard to complain or be sad in the presence of a woman who never complained. She was always finding joy even in the darkest of hours. She never needed much to be happy, but her husband and her children. Her heart was open, and she treated everyone she encountered as family. Victor described her as an angel that God allowed us to borrow for 59 years. On Wednesday, January 6th 2021, God called Cathy back home. Cathy died at WellStar hospital due to COVID-19 complications with pneumonia. Cathy is survived by her father, James Bond, her husband, Victor Sanders, and both her son’s Chris Sanders and daughter in law, Tristan Sanders, Kyle Sanders and his wife-to-be Stephanie Ferguson and son James. Beloved Mother: “All that I am, or ever hope to be, I owe to my angel mother.” - Abraham Lincoln “ I truly never learned what the words ‘I miss you’ were until I reached for my mom's hands and it wasn’t there.” Beloved wife: "Your love makes me stronger, so I try harder. you are so special" - Cathy Sanders

Cathy Bond Sanders was born at Crawford W. Long Memorial Hospital in Atlanta, Georgia. Raised in Austell, Georgia, Cathy was the only child of James C. Bond and Carolyn F. Bond. Growing up, Cathy always had a sense of adventure and a love for... View Obituary & Service Information

The family of Cathy Bond Sanders created this Life Tributes page to make it easy to share your memories.

Send flowers to the Sanders family.