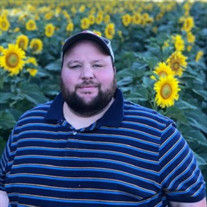 Alexander “Alex” Lee Pearce, 33, of Sharpsburg, went to be with the Lord Saturday, May 22, 2021. He was born July 22, 1987 in Ocala, Florida to John and Rebecca Pearce. Alex was preceded in death by two Grandfathers, Joseph Pearce and Charles Ford. Alex loved the outdoors. Loved to Hunt, Fish, Camp, Boating. He had a great personality always loving to cut up with friends and family. He met the love of his life Kelsi Antram in Winter Haven, Florida December of 2013, they got married June 10, 2017. They would have celebrated their 4th anniversary this year. He also loved what he did for a living. He worked for The Fresh Market for 14 years, both as a meat cutter and as a department manager. He always dreamed of having his own butcher shop. He was a member of the Dogwood Church and an active member of the Coweta Foster Parents Association. He and Kelsi have fostered 5 children over the years. He is survived by his wife, Kelsi Antram-Pearce, of Sharpsburg, Two Children. His parents John and Rebecca Pearce of Ocala, Florida. Grandmothers Alice Pearce of Ocala, Florida and Mary Jean Ford of Athens, West Virginia. Two brothers and a sister-in-law, Joseph E. and Deepa Pearce of Birmingham, Alabama and Robert W. Pearce of Daytona Beach, Florida. Mother and Father-in-law, Jerry and Kim Antram of Fayetteville, GA. One Brother-in-law, Darian Antram of Hilton Head, SC. One nephew Heraclius Pearce of Birmingham, Alabama. Many Aunts and Uncles. Memorial Service will be held to celebrate Alex, Saturday, June 5, 2021 at 11:00 AM at Dogwood Church, 975 GA-74, Tyrone, GA 30290 with the Rev. Dr. Keith Moore officiating. Private Inurnment will be held at a later date. Donation may be made to: Hope Revisited, PO Box 143 Newnan, GA 30264, this was a Passion Project for both Kelsi and Alex. www.givinggrid.com/hoperevisited

The family of Alexander Lee Pearce created this Life Tributes page to make it easy to share your memories.

Send flowers to the Pearce family.